This document explains how to package a release of AMAPstudio that can be distributed to users NOT members of the AMAPstudio community (Developers + Modellers). It was written to help the AMAPstudio modellers distribute their models.

If you want to distribute your models outside the AMAPstudio community, you should choose a distribution license by copying two files in french and english, named respectively license_fr.html and license_en.html, in the main directory of your module (e.g. in amapstudio/src/jeeb/simeo/module/lollymangrove/). We suggest the Lesser General Public Licence (free license) if you agree with its terms. You are free to choose another license.

AMAPstudio includes the IzPack tool to generate a standalone installer for distribution. 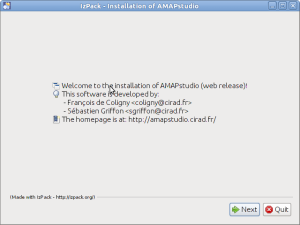 To create an installer containing the lollymangrove Simeo module (located in the directory src/jeeb/simeo/module/), including the sources codes, open a terminal, go to the amapstudio/ installation directory with cd and copy/paste the following command:

It will generate a file named AMAPstudio-setup.jar.

⇒ Rename the file as you want, e.g. AMAPstudio-Lollymangrove-feb2013-setup.jar

You can then distribute this jar file to any of your partners. To run this installer, they will need java 1.8 installed on their computer.