AMAPstudio projects can be of several types, mainly focused on plant architecture. Two main software embed architectural plant models at the individual or scene levels, resp. in Xplo and Simeo. Both software include an 'editor' mode to load, edit, explore, view in 3D one or several plants.

Banana tree (Musa sp.) architectural growth and development model is based on PRINCIPES.

This model describes whole banana trees architecture at simple organ's level. This model is dedicated to banana tree aerial vegetative and reproductive parts. It enables modelling and simulation of every species of banana tree. This model can apply for agronomic purposes.

This is a new project started with the company Sun’R (https://sunr.fr/) which promotes the use of photovoltaic energy in rural areas and experiments agrivoltaic schemes combining photovoltaic panels and food crops1. The purpose here is to simulate both the light intercepted by rotating solar panels (trackers) and the light available for underlying crops. Maxime Ryckewaert, a research engineer from Sun’R, is currently working on this project under the supervision of J. Dauzat and S. Griffon. The results already obtained by adapting Archimed modules allow (i) to control the panels orientation for maximizing or minimizing their light interception and (ii) to map the light transmitted at ground level at a given time (as illustrated below) or integrated over a user-defined period.

X-Palm is a functional structural growth plant models respectively dedicated to palms. Using object-oriented modeling, this model is based on an explicit representation of plant topology and simulates plant morphogenesis as the result of meristem functioning and organ growth. At each time step of the model (day) an index of competition (Ic) is computed as the ratio between plant assimilate supply coming from photosynthesis activity and organ assimilate demand for growth and maintenance respiration. Estimation of organ assimilate demand is based on its potential organ growth (depending on cultivar characteristics) according to its physiological age and on its biomass composition. In the current version of the model, assimilate supply is estimated using the Monteith formalism and the Beer-Lambert law. Future development of the model will be performed by coupling XPalm to VPalm and Archimed modules to estimate the photosynthetic activity of individual trees within a stand.

In X-PALM Ic (source/demand ratio) modulates plant morphogenesis and topology by determining many developmental processes. The main originality of this model is to formalize the sequence and interdependency of yield elaboration processes each having its own sensitivity to plant nutritional status represented by Ic. During these specific stages of sensitivity, probability laws are used to determine inflorescence status (aborted, female, male) according to Ic. Similarly, quantitative relationships are used to regulate other yield components depending on Ic (number of flowers per inflorescence, fruit-set, …). 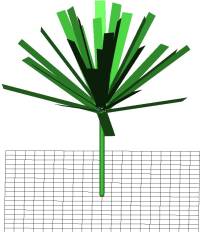 VPalm is built on the modeling of architectural traits at different scales. For each trait (e.g. frond curvature, leaflets spacing or leaflets insertion angles) a proper function was fitted and tested for different oil palm progenies by R. Perez (PhD student). For the sake of simplicity and versatility, the simulator accounts for the inter-tree variability for each trait through the input parameter file. Therefore the simulation of a population of trees is achieved in two steps: 1) simulation of different parameter files with an R script and 2) simulation of corresponding 3D mock-ups.

Palm mock-ups are written in the “opf” format“ and can readily be uploaded in Simeo for creating a palm stand. After running the radiative model Archimed-MMR the mock-ups are enriched with new attributes for each plant element: the irradiance (MJ m-2) and the total light intercepted (MJ). See: Archimed screenshots 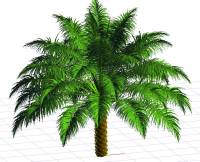 Illustration of some architectural traits that are modeled at different scales. Example of VPalm output

⇒ Have a look on a 3D palm (11Mo, hosted in an external server, needs a recent browser supporting html5)

The objective of the project is to simulate different experimental and instrumental conditions of a spatial Lidar mission designed for vegetation monitoring. The project will first use trees computed from AmapSim, calibrated on in-situ measures, in order to simulate Lidar measurement with LIDART model and compare results with DART model (developed at CESBIO laboratory). Then these trees will be simplified, in order to make a sensitivity study on Lidar measurements. On the other hand, Lidar simulations will be computed with trees imported from RAMI IV intercomparison model experiment. 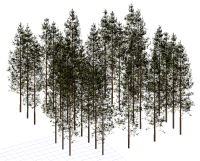 The objectives of the Lollymangrove project are threefold. First, the development of a standardized protocol for describing mangrove stands from forest inventories is addressed. Second, integration of allometric relationships between DBH, crown dimension, tree height and tree biomass makes the visualization of lollypop-like mangrove stands possible and, as well, the computation of biomass at both the tree and stand scales. The final objective is to provide a robust and easy-to-use interface allowing data exportation into various formats directly usable by other simulation tools e.g. the DART model, which is a 3D radiative transfer model able to simulate optical remote sensing images.

Output consists in default Xplo visualisation (browser, 3D) and a chart that shows the progression of some numerical indices along time (leaf surface, branch number and wood volume).

The aim of the project is to simulate the growth of several tree individuals in a forest stand. The growth of an axis depends on the amount of light that it and its leaves receive. The simulation process then combines architectural rules defined at species level (AmapSim), an illumination module used to assess light interception by leaves (MIR), and a coupling of axis growth and ramification capabilities with local light interception.

The aim of this study is to build a minimalistic model of tree aerial part growth and development based on carbon allocation. This model, called DRAFt, will include some core mechanistic processes which reflect endogenous processes. Simulation of DRAFt should set up plant architectures (growing set of Gu topologically organised and characterised by their size and mass) that show base effect and drift, thus allowing to test if the modelled endogenous processes are able to generate morphogenetical gradients according to botanical knowledge. DRAFt has 6 input parameters and generates a growing tree structure according to an iterative loop consisting of six successive steps.

Palm tree architectural growth and development model. PRINCIPES is NOT a functional model, it is a structural model, which describes whole palm-trees architecture at simple organ's level. This model is dedicated to palm-tree aerial vegetative and reproductive parts. It enables modelling and simulation of every (we hope) genus and species of palm-tree. This model can apply for instance to agronomic most important palm-trees, such as oil-palm, date-palm and coconut trees. But it is possible to use it for any other genus, such as Trachycarpus, Washingtonia and so on…and even Cycas! That is, as well as pinnated or palmated palm-tress can be modelled through PRINCIPES.


2015 update: Organs evolution along time has been added in the model. 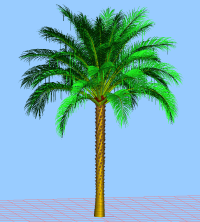 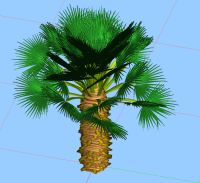 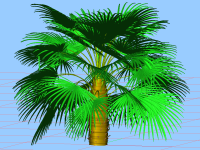 Many models already exist through literature dealing with root system representation, among which pure structure models such as Root Typ (Pagès et al. 2004)SimRoot (Lynch et al. 1997), AmapSim (Jourdan and Rey 1997); diffusion PDE models (Bastian et al. 2008; Bonneu et al. 2009); and structure/function that are rather scarce and recent [6 Dupuy] may be aroused. Nevertheless in these studies, root architecture modelling was not carried out at organ level including environmental influence and not designed for integration into a whole plant characterization. We propose here a multidisciplinary study on root system from field observations, architectural analysis, formal and mathematical modeling and finally software simulation. Each speciality is individually investigated through an integrative and coherent approach that leads to a generic model (DigR) and its software simulator. This representation is designed for further integration into a global structure/function plant model. DigR model is based on three main key points: (i) independent root type identification (ii) architectural analysis and modeling of root system at plant level; (iii) management of root architecture setup indexed on root length. Architecture analysis applied to root system (Atger and Edelin 1994) leads to root type organisation for each species. Roots belonging to a particular type share dynamical and morphological characteristics. Root architectural setup consists in topological features as apical growth, lateral branching, senescence and death, and geometrical features as secondary growth and axes spatial positioning. These features are modeled in DigR through 23 parameters whose values can evolve as a function of length position along the root axes for each root type. Topology rules apical growth speed, delayed growth, death and self pruning probabilities. Branching is characterized by spacing and mixture of lateral root types. Geometry rules root diameter increase, branching angles and growth directions (including local deviations and global reorientation). DigR simulator provides a user interface to input parameter values specific to each species. It is integrated into the Xplo environment, which means that its multi-scale memory representation is ready for dynamical 3D visualization, statistical analysis and saving to standard format. DigR is simulated in a quasi-parallel computing algorithm and may be used either as a standalone application or integrated in other simulation platforms. This will allow further implementation of functional – structural interactions during growth simulation. The software is distributed under free LGPL license and is dedicated both to biologists and modelers.

An editor for plant architecture topology and geometry.

AmapSim: A Structural Whole-plant Simulator Based on Botanical Knowledge and Designed to Host External Functional Models.

Layout trees and plants with various patterns, Delaunay triangulation and associated Voronoi diagram, export to Digiplante software with the surface for each plant, viewing in SLE and AMAP renderers. Hosted in Simeo

Creation of vegetal scenes made of .opf files mainly for connection with biophysical calculation tools or rendering in external renderers.

Fire Paradox Fuel manager: user friendly software that generates vegetation scenes in 3D to be used as input data for fire behaviour models. This project is hosted in Capsis and is based on the Sketch library, the same base than Simeo and Xplo.

Except where otherwise noted, content on this wiki is licensed under the following license: CC Attribution-Share Alike 4.0 International